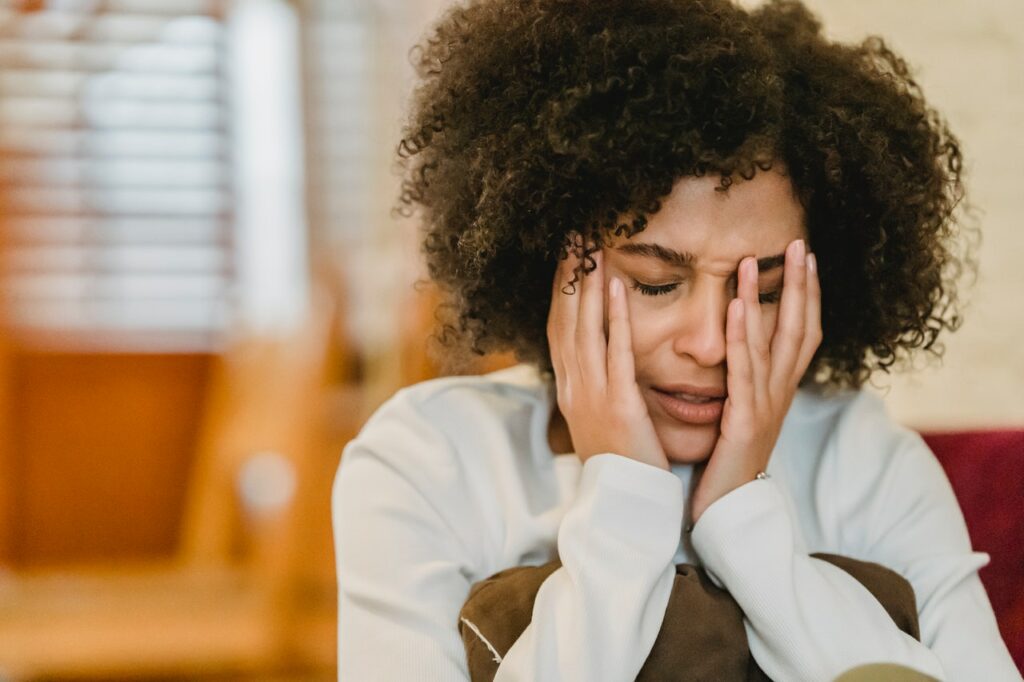 If you were to wake up tomorrow morning knowing you had to face a big bully no matter where you went, how would you handle it? Would you anxiously worry and fret about what the bully would do or say to make you feel awful? Or would you decide to shut the bully down? Now, what if I told you that bully was you. Let me explain. If you are relentlessly self-critical, you are essentially bullying yourself. In other words, you are the bully and the anxious victim. Yet, you probably have never thought about it in those terms. So, let me show you how self-criticism and anxiety feed off each other.

The Vicious Cycle Of Self-Criticism And Anxiety

How anxiety makes you too self-critical

Years ago, I had a client dealing with social anxiety. In one of our discussions, she revealed that she was proud she had never called her children belittling names. However, throughout a couple of sessions, it became pretty clear that she didn’t hold that same standard where she was concerned. She revealed that she has this running dialogue in the back of her head when interacting with others, saying such things as, “I’m such an idiot,” or “I’m so stupid.”

She didn’t realize that her social anxiety was like an internal radar, always  looking for negative judgments of others or times where she was looking incompetent. And this caused her to be overly judgmental and negative about herself. Out of fear, she became her own worst critic.

How being too self-critical makes you anxious

While my client’s anxiety was making her too self-critical, she didn’t realize how at the same time, it was also feeding her anxiety.

By believing the garbage she was feeding herself, such as ”I’m such a failure,” “I look ridiculous,” or “Why the heck did I say that in the meeting? I’m so stupid,” her pre-existing anxiety would increase.

She would worry that her fears (looking ridiculous, sounding stupid, etc.) would come true. Then she would bully herself for it. Then worry some more and so keep the vicious cycle of self-criticism and anxiety going.

Breaking The Vicious Cycle Of Self-Criticism And Anxiety

Many of us find ourselves fighting a self-critic that is hard to get away from. But, here’s the good news. You CAN defeat that self-critic  by challenging that voice that puts you down. Here are six steps that can help you challenge that voice:

1. Pay attention to your thoughts.

Most of the time, you’re so used to listening to your inner dialogue that’s it easy to become oblivious to the messages you are sending yourself. Start paying closer attention to your thoughts, and you might be surprised how many times you call yourself demeaning names or talk yourself out of doing something because your inner voice says you aren’t capable of accomplishing it.

Self-criticism focuses on your mistakes and makes you feel trapped. Whereas self-correction is looking at your mistakes, learning from them, and making a plan of action to lead you forward.

For the most part, no one needs help seeing the negatives. And even if some of the negatives are true, why not consider the positives also? Try to acknowledge what you did right instead of berating yourself over what you did wrong.

4. BE AS KIND TO YOURSELF AS YOU ARE TO OTHERS.

Why is it often easier to be more compassionate towards other people than it is to yourself? — As an example, calling yourself an idiot when you make a mistake. But, of course, it’s pretty unlikely you would say such a  statement to a loved one or friend. And especially with the same disgusting tone, you apply to yourself.

Therefore, acknowledge what a double standard it is to be so much harsher on yourself than with someone else. And when the next time you make a mistake or do something you regret, ask yourself this question, “What would I say to a friend who did the same thing?” And then treat yourself in the same way.

5. LET YOURSELF BE HUMAN.

Say after me, “EVERYONE makes mistakes, has flaws and defects.” Being human means we have some unlovable, quirky, and possibly nasty qualities at times. And so do your family, friends, and everyone else on this planet. And just as we accept and love them, so should you love and accept yourself.

When you make mistakes or don’t think you look perfect or treat someone wrongly, etc., don’t spend hours criticizing yourself for it. Instead, recognize your shortcoming without digging a hole and climbing into it. And then rise above your self-critic and say, “Well, I guess this proves I am only human.” And then DEAL with it!

6. FOCUS ON YOUR GOALS, NOT ON YOUR SELF-CRITIC.

It can be challenging to put your self-critic down. And no matter what you do, that darn voice wants to take over your thought process. So when that happens, put a mental hand up and say, “Yeah, yeah, I hear you, but I’m not intimidated, and I’m going to get on with my life doing what I have to do.”

Just because the self-critical voice is there, you don’t have to accept what it is saying. In fact, the more times you focus on moving on regardless of the critic, the fainter the voice will become.By practicing this step, you will be training your brain to develop a more productive inner voice that will fuel your efforts to reach your goals.

Self-criticism and anxiety can knock you down, but you don’t have to stay down.

I believe these six steps can help reduce the anxiety in your life that comes with self-criticism and give you some strategies to create effective, long-lasting ways to quiet the destructive inner voice.

And lastly, if you believe you would benefit by learning more ways to manage anxiety, working with an anxiety coach through breakthrough coaching is a great way to go. Anxiety coaches are trained and skilled in helping you make significant, even difficult, lifestyle changes while assisting you every step of the way.

Hi, I’m Kris Henderson, LPC. I want you to know that I am here to help. The easiest way to start taking control of your anxiety is to take the FREE 5-Day Anxiety Detox Challenge. If you would like more personalized support, I invite you to contact me or make an appointment online. I’d love the opportunity to cheer you on as you train your brain to rise above the self-critic voice and learn to recognize how your thought patterns are key to understanding how your thinking affects your life.

Posted in Blog, Dealing with the Stress, Anxiety & Overwhelm of Life